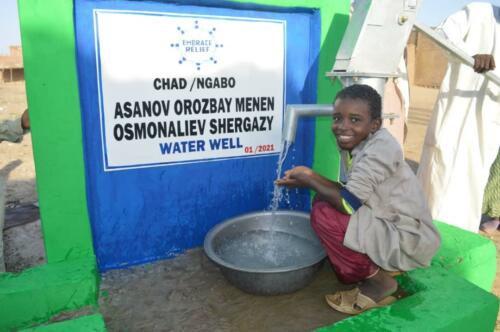 Water wells in Chad: ‘With this, our life will be easier’

For many years, the people of Chedide 2 village, located in the central African nation of Chad, have spent up to eight hours each day fetching water. The small rural village of approximately 80 families simply has no other option. Safe, clean water is one of life’s most basic necessities – without it, humans can’t grow their own food, can’t live in a hygienic environment, and can’t survive.

“Water is life,” says Gambo Idriss, the village chief in Chedide 2. “It is our breath.”

But life in this part of the world is very different from America, where clean water is continuously piped into every home. In Chad, every day is organized around basic questions that we may never need to consider: Where can we find water? And how much of my day will it take to bring home?

If water is life, then the scarcity that requires a daily, hours-long walk to the nearest water source is a threat to the survival of the people of Chedide 2, as well as those in the many thousands of villages in sub-Saharan Africa who live in similar conditions. There is plenty of clean water in this part of the world. But most of it is located underground – and without the money and machinery to build a well, the villagers can’t access it. So they have to make do with water wherever they can find it, however long it takes.

“We are walking every day for four hours [one way] next to Lake Chad for agriculture,” Gambo Idriss says. “But the lake is getting smaller, and we need to travel a longer distance every year to reach water for planting.”

This process, repeated daily in thousands of villages across sub-Saharan Africa, is often undertaken by young girls and women, and altogether wastes millions of hours each year that could be instead spent taking care of families, receiving an education, or starting a business.

For their drinking water, the villagers of Chedide 2 fetch water from an open well during Chad’s dry season, about nine months in a year. During the rainy season, they collect rainwater directly from the puddles that fill holes in the ground. In both cases, the unprotected water they drink is susceptible to contamination by bacteria and parasites, which cause the waterborne diseases – like cholera or typhoid – that kill millions of people each year.

Through coordination with our partners, Embrace Relief identified an abandoned water well located much closer to Chedide 2. If it could be reconstructed to meet our strict design standards, this well would dramatically reduce the amount of time villagers needed to fetch water, while also ensuring that it would be free from contamination. And so, with the help of our donors, Embrace Relief did just that.

“The broken well you just reconstructed has been there for eight years,” Gambo Idriss said. “With this well our life will be easier, Our children have time for education, even cooking becomes easy.”Embrace Relief has built more than 500 new wells in sub-Saharan Africa, and the well near Chedide 2 is one of more than 100 existing wells that we’ve rebuilt under the Fountains of Hope initiative. Reconstructing a well saves precious time, money and resources, and can be done for a third of the cost and time needed to build a new one.

But more importantly, the construction of a new well, or the reconstruction of an abandoned well, will give the villagers hope for a better future. Because of donors like you, they’ll be healthier, more educated, more agriculturally productive, wealthier. We can unlock a sustainable and successful future for the people of Chedide 2, and for the many millions of people in villages like it. And by doing so, we can make the world a healthier, happier place.