Refugees who find themselves in these predicaments call Embrace Relief, and we place them into emergency housing until we can help them find a place to live. Furthermore, we provide translators to assist with their search, asylum paperwork, and place the children into school.

This program enables those within the United States who want to get involved in refugee relief by being personally matched with a refugee family in Greece. We currently have 110 families who have been symbolically adopted.

Refugees are systematically paired with volunteer native English speakers who meet once a week via a video or phone call where they discuss current events, read books, articles, and newspapers in English so the refugee can learn how to speak and understand the language.

Refugees: Aiding Those with Nothing and Nowhere to Go

We are living in the worst refugee crisis in history with over 80 million people worldwide forcibly displaced due to conflict, often with very little money or nothing but the shirts on their backs. Many are single mothers with children, and the incredibly hazardous, sometimes even fatal, trek is often done overnight. What many don’t know is that many refugees are doctors, lawyers, and professionals simply looking for safety and freedom and to forge newer, brighter futures for themselves and their families. This is why Embrace Relief has stepped in, to help provide all those things and more

Refugees who find themselves in these predicaments call Embrace Relief, and we place them into emergency housing until we can help them find a place to live.

Adopt a Refugee Family
in Greece

Embrace Relief coordinates a program enables those within the United States who want to get involved in refugee relief by being personally matched with a refugee family in Greece.

We currently have 300 refugees enrolled in this program. Refugees are systematically paired with volunteer native English speakers who meet once a week via a video or phone call

First Bricks Program was created in 2019. Dedicated to providing underserved refugee children the education they need and deserve for free

Since 2013, we have given relief to over 1.4 million refugees. To this day, 29 containers of relief goods were delivered to Syrian refugees in need, and a soup kitchen serving hot meals to up to 4,000 refugees in the border town of Kilis, Turkey. We have also provided the refugees their basic necessities, translators who helped their arrival go smoothly, and pro-bono lawyers to assist with the asylum-seeking process and any legal troubles they might face. In addition, we have implemented virtual English-speaking classes for them to learn how to communicate in a new land. Similarly, Embrace Relief has been working with local and national organizations in the U.S. to help acclimate incoming refugees and assisting families who have recently arrived in the country with guidance and material support.

Every minute 24 people are displaced around the world.

1 in 98 people on earth are either refugees, IDPs, or asylum seekers.

The COVID-19 pandemic has affected people all around the world and is impacting every aspect of life. This time of crisis is not easy for anyone and is especially difficult for refugees in Greece as they cannot practice social distancing or self-quarantining due to overcrowded, unsanitary camps. Embrace Relief is dedicated to helping those who are in need the most which are why we help refugees find a house, support 280 families with rent payments so they can stay isolated, distributed food to 580 families, provide English classes via video meetings to 300 refugee students, and have pro-bono lawyers who provide refugees and asylum seekers with legal advice.
Donate For Refugee Relief Today

A refugee is a displaced person who was forced to flee their home country due to conflict, violence, war, or persecution. Refugees cross international borders to avoid being persecuted for their race, religion, political opinion, profession, nationality, or social group. Children are among the most vulnerable within the refugee population. During their most transformative years, many miss years of education which stunts both their academic and social development. Moreover, when they flee with (or without) their parents, they must learn a new language and assimilate into a new culture at a young age.
According to UNHCR, there are roughly 79.5 million forcibly displaced people and 26 million refugees; that’s 1% of the world’s population.
According to the International Refugee Committee, there is not a single source or reason for the refugee crisis. For example, the civil war in Syria forced millions of people to flee their homes, the economic crisis in Venezuela drove over 4 million people across international borders, the civil war and famine in Yemen have left 24 million people in need of immediate aid, Somalia has been afflicted by conflict and droughts, and over 190,900 people have fled from various countries such as Turkey, Iran, Iraq, Afghanistan, and others to Greece to avoid religious and political persecution and enter Europe.
Embrace Relief offers different ways you can help a refugee child or children. First Bricks is an online program for refugee school-aged children that enables them to get a quality education, improve their social awareness, and hone their academic, social, problem solving, relationship, and leadership skills. Our classes include academic, social, and cultural classes which holistically aid in the development of their psychological and social development.
Additionally, we hold campaigns throughout the year to donate toys, candies, and school supplies to refugee children in our programs.
An IDP is an Internally Displaced Person who was forced to flee their home but not their country. This is usually due to escaping natural disasters or strife such as famine, disease, or conflict zones.
At Embrace Relief, we offer people the opportunity to symbolically“Adopt a Refugee Family”. There is a short form to fill out and submit. After completing the form, you will be matched with a refugee family in need and will be contacted by one of our staff members who will provide you with the family portfolio and contact information. From there you will be able to make direct contact and work one on one with your adopted refugee family. It costs $300 per month to support an individual and $500 per month to support a family.
A refugee camp is a settlement designated to provide temporary and emergency accommodations for refugees. Unfortunately, refugee camps have very limited resources and services because they are often overcrowded. Individuals in camps have restricted access to job prospects, public education, home or land ownership, health care, social services, and even electricity.
Potential Infographic Idea: 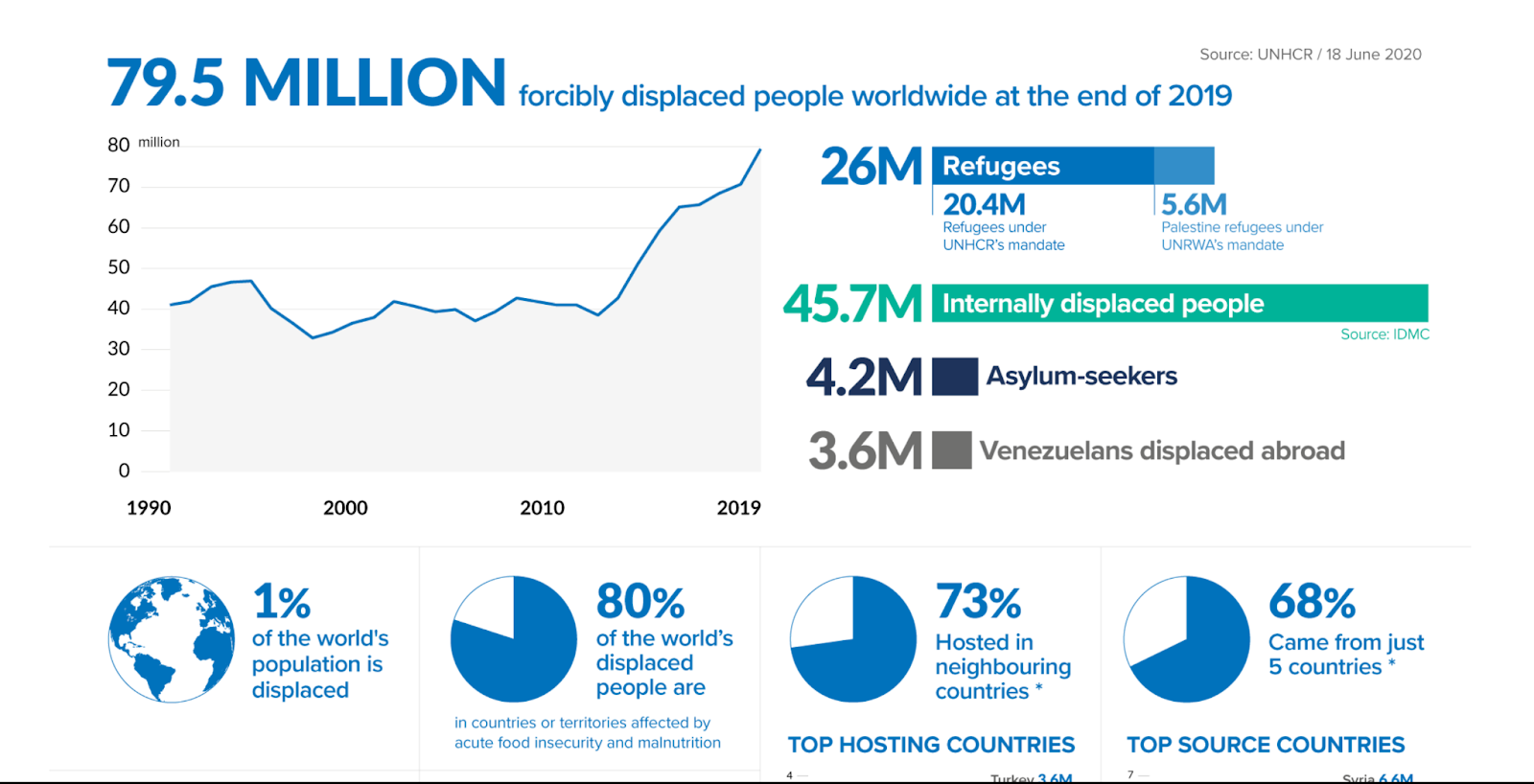 Since 2013, Embrace Relief has aided 1.4 million refugees with psychological and legal support, enrolled 300 in English courses, provided 280 refugee families with monthly rent assistance, and distributed 2,240 gift bags to refugee children to welcome them into their new country and make them feel cared for. But there are still so many more refugees who desperately need support and so much more can be done to help them not only survive, but establish new, permanent homes and contribute to their new communities. Please consider donating today to help them turn their lives completely around and pave prosperous futures for themselves and their families.