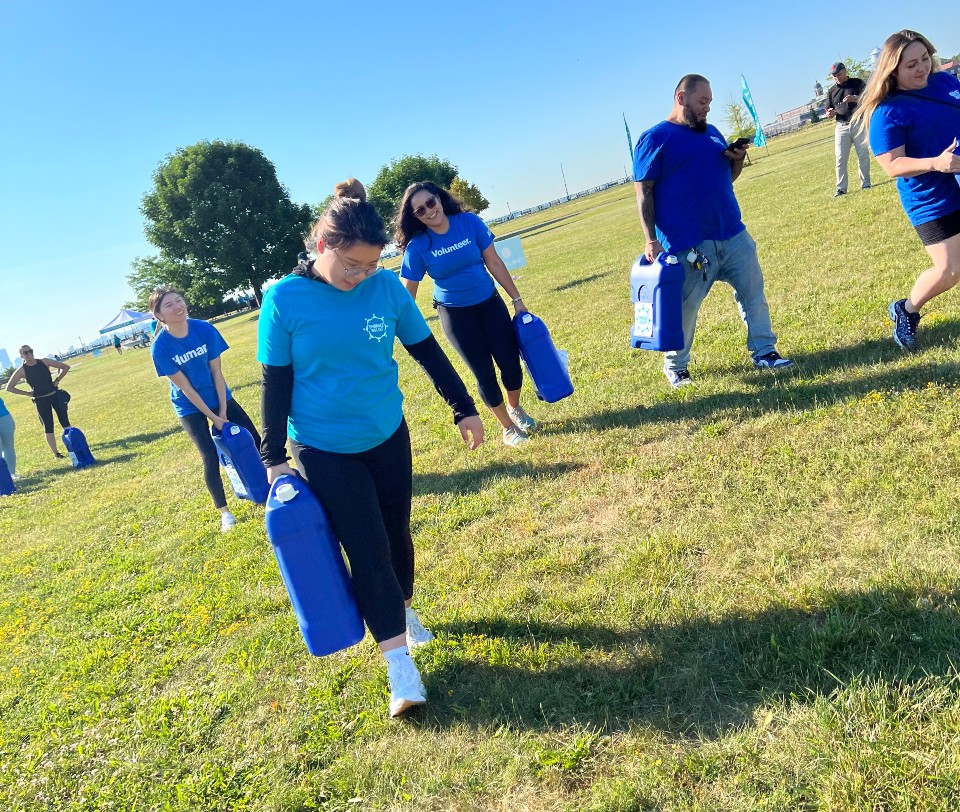 Crowds of people filled the pathways beside the Hudson River on Saturday morning, June 25, braving the heat and humidity to complete Embrace Relief’s “H2Ow Far Can You Walk?” 5K Walkathon Fundraiser at Liberty State Park in Jersey City, NJ.

This first-annual event raised money for Embrace Relief’s “Fountains of Hope” initiative, which reconstructs abandoned non-operational water wells in the African countries of Chad, Cameroon and Nigeria. All proceeds from the Walkathon are going towards Embrace Relief’s goal of rebuilding 250 water wells in 2022, which would provide clean drinking water for at least 250,000 people in those countries.

“Today’s event was great,” said Embrace Relief CEO Osman Dulgeroglu. “I think it was a great opportunity for everyone to learn, to gain a greater understanding of what people are experiencing, and to come together and support people. We’re looking forward to organizing this event again next year, and in the following years as well.”

In addition to the many dozens of walkers who joined the 5K in person Saturday, Embrace Relief also received the support of hundreds of thousands more people around the world virtually through a partnership with SweatCoin, an step-counting app that turns each step into digital currency.

The idea of the “H2Ow Far Can You Walk?” 5K Walkathon came from Embrace Relief’s experience working with the communities we serve. In America, our water supply is safe, clean and easily accessible. But in parts of Africa, people – usually young girls and women – must carry heavy water containers over long distances in extreme heat, often while barefoot, risking their safety and health.

The walkers at Saturday’s walkathon were able to experience a very small taste of what this life is like. The air temperature at Liberty State Park exceeded 80 degrees by the time the first participants arrived for registration at 7:30 a.m. The heat and humidity continued to climb, nearing 90 degrees by the time the opening ceremonies got underway shortly after 8:30, featuring speeches from Dulgeroglu, Embrace Relief project manager Dana Coppola, and a pair of honored guests, U.S. Winter Olympian hopeful Lauren Brzozowski and Jersey City Councilman James Solomon.

Before the walk started, many walkers tried out the “Challenge Area,” in which they could carry a full 6.5-gallon jug of water a mere 50 meters, a fraction of the distance most water-carriers in Africa walk daily.

“It completely opened my eyes,” said Wendy, one of the participants. “I would have had absolutely no idea the distance they walk, the danger they’d be in, the weight they’re carrying. I tried out [the “Challenge Area”] and I couldn’t imagine carrying that much weight for the whole 5K, much less doing it multiple times a week. And it’s not an option for many people, it’s literally a necessity to live. It was really impactful.”

Addressing the crowd at a stage near the 5K’s starting line, the opening ceremony speakers stressed the urgency of reaching Embrace Relief’s 250-well goal. Councilman Solomon noted that the number of people who will be helped this year by the Fountains of Hope project (250,000) is nearly equivalent to the population of Jersey City, New Jersey’s second-largest municipality. The clean water they receive will improve and save tens of thousands of lives, boost economic and agricultural production, and give women and girls more time to pursue their education and support their families.

“We know that with people’s support, we can reach our goal of 250 wells this year,” said Project Manager Dana Coppola. “We want to encourage everyone here, our donors, supporters, anyone who’s just learning about this issue for the first time, to educate yourself, get involved, advocate, give if you can, and try to do what you can!”

The actual 5K walk began shortly after 9 a.m., with groups of people filing down the path at their own speed. Walkers could enjoy strolling alongside the Hudson River accompanied by picturesque views of New York Harbor, the Statue of Liberty, and the Manhattan skyline. (And unlike their counterparts in Africa, walkers could refresh themselves at two water stations.) After reaching the southern tip of Liberty State Park, walkers looped around and retraced their steps to return to the starting line.

What is food insecurity?
Hand washing: Vital for all, a luxury for some